I had an unexpected meeting with a rather important person today! 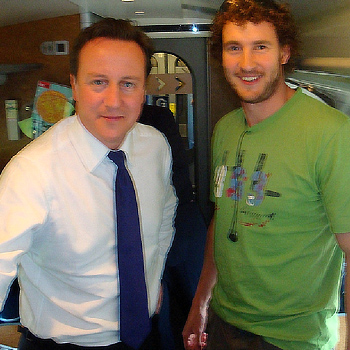 I was sat on the train going to London to attend a course, when I noticed a lot of big guys in suits in my carriage. I guessed there was someone of some importance on my train but thought nothing of it. I had work to do so opened up my laptop and got stuck in.

About half way into the journey I heard a conductor say to one of his colleagues, “I can’t believe Mr Cameron’s on here!” My ears pricked up but I got back into my work.

As we were getting closer to London, the word must have spread. A few of the big guys came rushing up my carriage as people were trying to enter our compartment, and they were preventing them from coming in.

One of the big guys sat next to me and we began to chat. He turned out to be rather high up in his job, although I cannot reveal his name! As we chatted, I eventually asked him if it was true that Prime Minister was on board and he said, “Well yeah, he’s a few rows in front of you!” Obviously I thought this was fantastic, but played it cool.

We chatted some more and I thought I would be cheeky and asked him if I could get a business card signed by David himself! He said that he would go and find out and disappeared down the carriage and I back into my work.

I heard a voice say, “Good afternoon Adam” and I looked up and said “O hi there Mr Cameron, how you doing?!” I stood up and shook his hand and we began to chat. I explained how I had recently opened up Coastal Chiropractic Clinic in St Annes and started my own business. He said how it was good that I had the drive, determination and ambition to do that especially in the current times which obviously I took as a massive compliment coming from him.

We began to talk about how President Obama is a big advocate for Chiropractic and would like it to be used more in America. I asked Mr Cameron if he had been to see a Chiropractor in the past and he said he had not. We spoke about the benefits of Chiropractic and how it can help improve the quality of people’s lives. I explained that my aim for the Coastal Chiropractic Clinic is to help as many people as possible and to try and be “proactive” rather than “reactive” and he said that is the best way to be!

We chatted some more and then had this photo taken…

Unfortunately the train moved a wee bit as it was taken so it is not crystal clear. He signed my business card which is proudly in the reception of Coastal Chiropractic Clinic. We shook hands and wished each other well. As Mr Cameron went to make his way back to his seat, I tapped him on the shoulder and as he turned round I gave him a business card, and said “If you ever need my help, give me a bell!”

A few more stories rose from that day but they can be saved for another time.

I would like to say a big thank you to the big guy, who cannot be named, that made meeting the Prime Minister, David Cameron possible and also to Mr Cameron for making the time to come over, meet and chat with me.
It has made a great story to tell people about and my family, friends and patients loved it! After all it is not every day that you get to meet one of the most important people in the world is it!?